Encouraging workplace safety is no longer a gamble for Tom Lengyel, health and safety supervisor at Trans-End Technology Ashtabula, Ohio. Before Jan.1, 1994, accidents at the Union Carbide subsidiary were at an all-time high and many were not being reported. The company needed an aggressive safety incentive program that would make a powerful impact.

Trans-End Technology had been offering extensive safety education and training as well as a cash-incentive program. The employees were awarded a cash reward on a quarterly basis for group performance. Every month, the cash award grew depending on the group’s safety record. 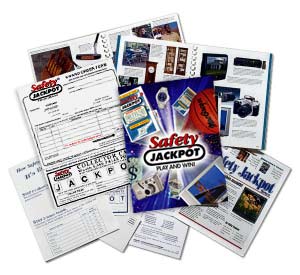 Lengyel wanted a stronger program though, one that did not require much administration but would build safety awareness through excitement and group interaction as well as award individual and team accomplishment. Lengyel found flexibility, simplicity and excitement in the Safety Jackpot program, which he implemented on Jan. 1, 1994.

“In the 44 years our company has existed, we have never seen a program with such powerful results,” Peavey said. “We combined the successful parts of our other programs into one simple package. We also conducted extensive field research to find out what really motivates and excites this particular demographic group.”

Safety Jackpot is based on the idea of a scratch-off game card. Employees who are accident-free and meet specific safety criteria receive a Safety Jackpot game card each week. Each game card is “worth” 25, 50, 75 and 100 award points.

Employees keep track of their own points/game cards to redeem them for brand-name merchandise from the Safety Jackpot catalog. Once the points are earned, the participant completes an order form specifying his award choice and sends the game cards to Peavey Performance Systems. Within 24 hours, Peavey ships the award to the individual’s residence or to the company for distribution.

In addition, each game card reveals a letter in the word J-A-C-K-P-O-T. Once the participant spells “jackpot” with the game cards, he receives 1,000 bonus points and becomes eligible for a grand prize drawing.

The grand-prize incentive is a powerful part of Safety Jackpot game, according to Peavey. “Employees are encouraged to trade gamecards and help each other qualify for the jackpot portion of the game,” he said. “It makes a powerful impact on building an environment of safety awareness and teamwork.” The program also boosts worker excitement with a series of color posters and Safety Jackpot letterhead to communicate program updates and rules.

(Safety Jackpot is based on the idea of a scratch-off game card.)

Trans-End’s Safety Jackpot program is based on three main objectives: injury-free performance, timely reporting of near misses and submission of safety suggestions (after the required four suggestions). Each week, employees are given a game card for meeting an objective.

After implementing Safety Jackpot, Trans-End dramatically changed its safety culture in just 1 year. The company’s recordable injuries dropped 67%, and the accident/incident reporting was up 12%. The near-miss reporting increased 167%, and Trans-End saw a 38% increase in cost-saving suggestions. Lost workday cases (LWC’s) were reduced by 100% and off-the job LWC’s decreased 75%. The company has gone 150,000 man-hours without an accident and remained injury-free in 1994.

The fact that no two programs are alike means that each program’s structure and game card allocations has its own twist, according to Peavey, making the program suitable for manufacturing, construction, transportation, casinos, hotels, health/medical, printing, textile, distribution and other industries.

Peavey Performance Systems has developed a sequel program to Safety Jackpot called Safety Blackjack as well as a program aimed at employee productivity called Performance Blackjack. The company offers custom-designed safety incentive programs as well. The success of the Safety Jackpot program, however, is a reminder of the program’s objective.

“The Safety Jackpot program was, and will continue to be, a strong contributor in Trans-End Technology’s quest to eliminate accidents and injuries from the workplace,” Lengyel said.

• A Southern California hospital attributed a savings of $267,593 after investing $7,500 in Safety Jackpot.

• A major U.S. Dept. of Defense contractor says that Safety Jackpot helped decrease accidents by more than 55% for a savings of $1.6 million annually.

• One of the country’s largest paper mills has dropped its OSHA incidence rate by 42.6%.

• The Safety Jackpot program has raised the level of safety awareness to an all-time high,” the safety manager said.

• Both our vehicle and OSHA-recordable rates have been cut in half!”

• A major medical care facility in Taws City, Mich., attributes a 67% decrease in serious injuries and a 75% reduction in minor injuries to Safety Jackpot.

• An engine remanufacturing facility said, ” Before Safety Jackpot, we used to have accidents weekly. Since its implementation, we have gone 4 months without a single one.”